Goldie Hawn and Kurt Russell are the perfect example of loving parents. Since the Hollywood duo began dating in 1983, the longtime lovebirds can’t help but gush over their blended brood of kids: Oliver Hudson, Boston Russell, Kate Hudson and Wyatt Russell.

The First Wives Club actress became a mom in 1976 when she welcomed her eldest son, Oliver. At the time, Goldie was married to her first husband, Bill Hudson. The former couple expanded Goldie’s family when Kate was born in 1979. The two called it quits three years later in 1982.

As for Kurt, the Escape From New York star experienced fatherhood for the first time when his eldest son, Boston, arrived in 1980. The Hollywood heartthrob and his first wife, Season Hubley, went their separate ways after four years of marriage in 1983.

Following his split with Season, it wasn’t long before Kurt and Goldie — who actually first met while filming The One and Only, Genuine, Original Family Band in 1996 — reconnected in 1983 on the set of Swing Shift. Sparks quickly flew between the two and it wasn’t long before they became an exclusive item. Three years later, the duo completed their family when Wyatt arrived in 1986.

Blending families with young kids can be challenging, but Goldie and Kurt made the transition look effortless. Fortunately, the Academy Award winner’s kids absolutely adored their new stepdad. Kate once recalled the “big moment” when she realized the Thing actor was becoming a member of their family.

“For me it felt like such a big moment because it was like, ‘My mom is madly in love with this guy.’ For me, at the time, it was like, ‘Is this going to be my dad?’” the Almost Famous actress shared during an episode of her podcast “Sibling Revelry.” “And I was meeting his son [Boston] which meant, ‘Does this mean that this is my brother?’ It was a lot to handle at such a young age.” 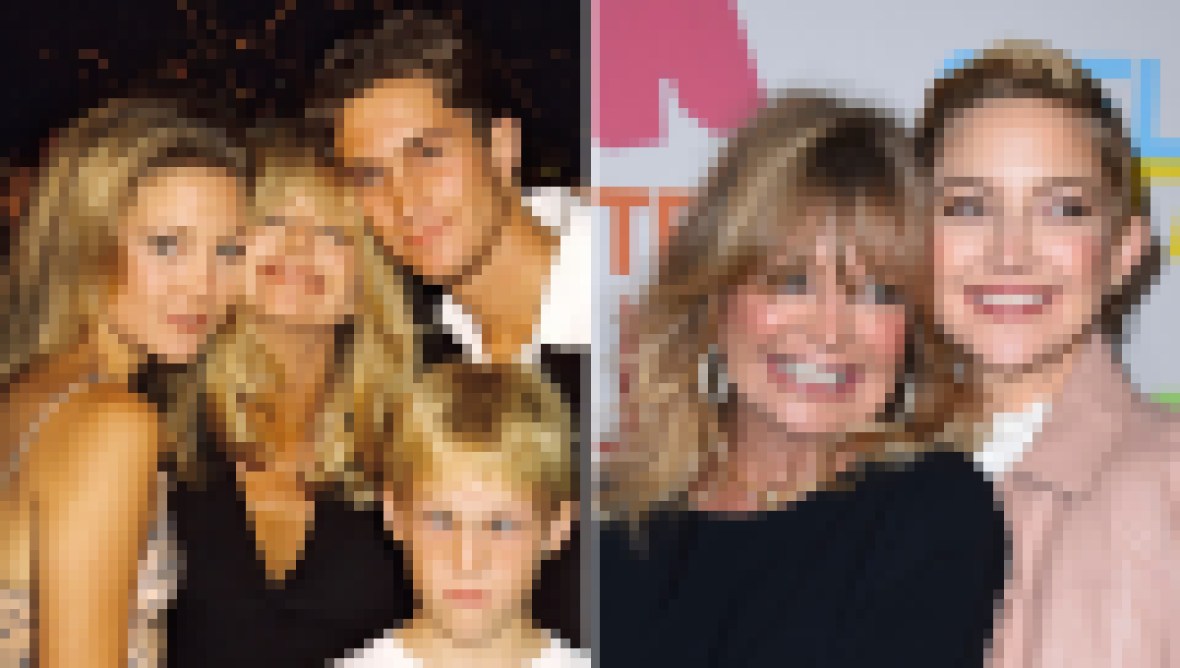 As the years have gone by, Goldie and Kurt’s bond with their family continued to get stronger. The Tombstone star especially shares a special relationship with Goldie’s only daughter. “Kurt has always been close to Kate and [has] seen her as his own daughter,” a source once told Closer Weekly.

Goldie and Kurt have one beautiful family.

Scroll through the gallery below to see Goldie and Kurt’s cutest quotes about being parents!

On Watching Kate Grow Up

“We hope our children will amplify the best part of us,” Goldie once told People. “I’m proud of my daughter. She has become a spokesperson herself for children’s wellness, for happiness, all the things that she grew up with.”

On Goldie and Kate’s Mother-Daughter Bond

“A mother-daughter bond is very different,” the Death Becomes Her actress told People. “When I had Wyatt — my third, Kurt’s and mine — [Kate] came to the hospital. She was 7, and she came up to me: ‘Mommy, I’m so happy I’m your only girl.’ I said, ‘I’m so happy too, honey.’ As we grow older together, I can’t express the amount of love, joy, laughter, sadness we share. She understands me, I understand her. We’re girls. We share everything. She’s, like, the greatest.”

On Letting Their Kids Grow Up

“We as mothers have to be able to not just pass the baton, but to be able to give free rein for your [kids] to grow, to make mistakes. Doesn’t mean they’re not watched. But it means that they’re honored,” Goldie gushed to the Huffington Post in 2015. “Just be there. You don’t always have to power over. I believe that this is one of the most important things as a parent you can do … to let go, in times, so these children can formulate their own identity.”

“We always trim the tree on Christmas Eve and we have a big meal,” Kurt told Closer Weekly. “[After dinner], the grandkids put their pajamas on and hang up their stockings. We get the fire going and when it gets dark we always choose someone to read ‘Twas the Night Before Christmas.”

On Raising Their Kids

“You’re creating one, two, three new people. You have a tremendous influence on these human beings,” Goldie explained to Today in 2015. “And these are people that you want, and hopefully will contribute in some way, and put some of the love back in the earth.”

“This is what we do,” she continued during her appearance. “This is what our job is as mothers. We create a good little soul and he or she will pass that on to his or her friends and make an influence. And that’s one way we can help make this world a better place.”

On Shaping Their Children into Good People

“Kurt and I are so proud,” the doting mom marveled on Today. “They’re mirroring a lot of the way they were raised, and that just shows you how important it is to raise your kids well, ’cause they will raise their kids well.”

On How Proud They Are

“A good family is the answer to happiness,” Goldie once told Australian Women’s Weekly. “I look at our kids and grandchildren and there’s nothing in the world that could make me as proud as I am of all them.”

On Watching Kate Be a Mom

“We’re really glad that she got [a daughter] and had an opportunity to have her,” Kurt shared with People following granddaughter Rani Rose’s birth in 2018. “We’re proud of Danny [Fujikawa] and the relationship that grew between Kate and Danny, the result being Rani Rose.”