There’s nobody quite like Goldie Hawn! The iconic actress starred in more than 25 movies throughout her illustrious Hollywood career so far, including roles in Private Benjamin, Overboard and The First Wives Club.

The beloved beauty first started in Hollywood when she got her big break on the 1960s TV variety show Rowan & Martin’s Laugh-In. In 1968, she made her film debut when she was cast in Disney’s The One and Only, Genuine, Original Family Band. The following year, her fame and fortune blew up after she starred in Cactus Flower in 1969, for which she won an Academy Award for best supporting actress. 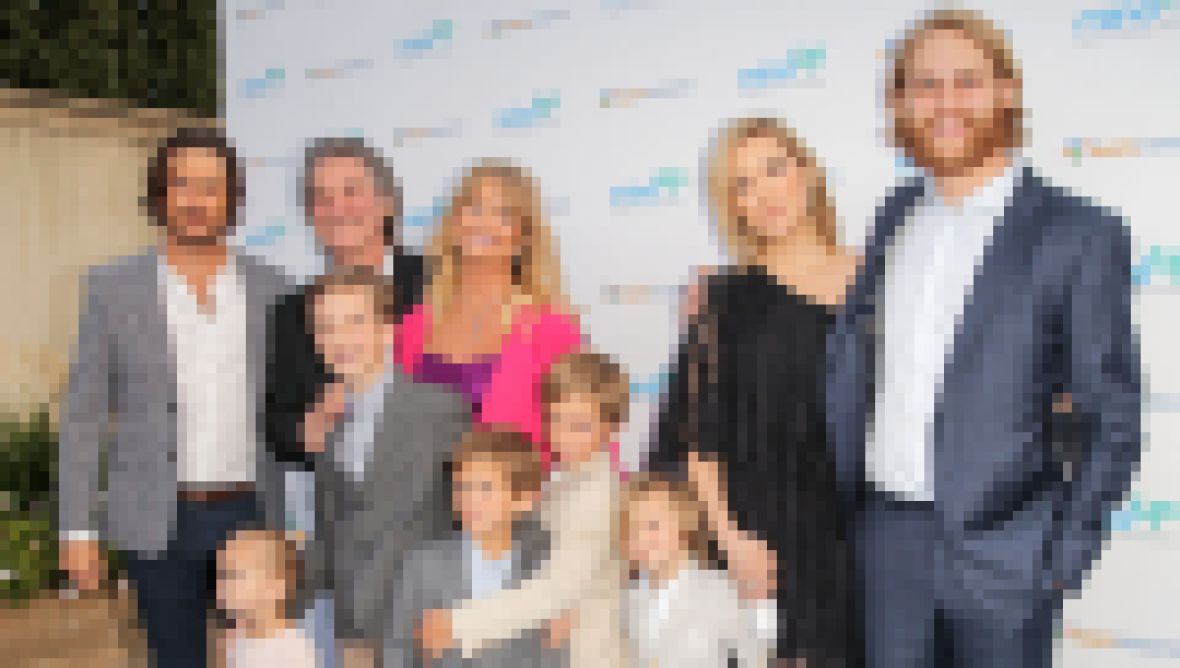 Goldie Hawn and Kurt Russell's Cutest Photos With Their Grandkids

Following her portrayal in 1987’s Overboard, the There’s a Girl in My Soup actress produced and starred in Private Benjamin in 1980. Aside from the film becoming one of her most memorable roles, she also earned an Oscar nomination. Goldie’s career continued to soar as she appeared in Bird on a Wire in 1990, Death Becomes Her in 1992, The First Wives Club in 1996 and many more.

Following her gig in The Banger Sisters in 2002, Goldie revealed she was taking a break from showbiz to focus on her family. The Golden Globe winner wanted more time with her longtime boyfriend, Kurt Russell, and their blended family of kids including Oliver Hudson, Kate Hudson, Boston Russell and Wyatt Russell.

What a Family! Meet Goldie Hawn and Kurt Russell's 6 Grandkids

Fortunately, her Hollywood hiatus came to an end after 15 years when she was cast alongside actress Amy Schumer in 2017’s Snatched. Although she missed being on the big screen, Goldie insisted she didn’t regret the years she took off for her family.

“A break from anything we do sometimes is a good thing,” she told Harper’s Bazaar in 2017. “I forgot how much fun [acting] was. I came out going, ‘I could do it again!'”

Now that she’s back and better than ever, fans shouldn’t expect the Oscar nominee to retire anytime soon. “Goldie has new goals to accomplish,” a friend of the actress previously told Closer Weekly. “It’s her third chapter, she knows that, and she wants to get it all right.”

Revamping her Hollywood success also includes staying in the best shape possible, both mentally and physically. “[Goldie] always says you’re as young as you feel, and she still feels like a 30-year-old,” the friend added. “She’s healthy, and vibrant, and comfortable in her own skin.”

In 1978’s Foul Play, Goldie plays a recently-divorced librarian who loses her memory after being mysteriously attacked. This was the first time the actress and actor Chevy Chase appeared onscreen together.

In one of the funniest movies of all time, Goldie played Judy Benjamin, a 28-year-old woman who receives a rude awakening when she joins the Army after her new husband (Albert Brooks) dies on their wedding night in 1980’s Private Benjamin.

This iconic film was so popular, it spawned a short-lived TV series in 1981.

This comedy featured Goldie as a public defender who helps her ex-husband — portrayed by Chevy Chase — deal with the legal aftermath of his bank robbery.

Go Goldie! The actress played the daughter of a famed football coach who coaches her own team to a state championship victory in this cute film Wildcats.

Though this romantic comedy was only considered a mild success when it first hit theaters in 1987, it has since become a cult classic due to its popularity on cable TV.

In the film, Goldie plays a spoiled woman who falls overboard while trying to find her wedding ring on the deck of her yacht. She develops amnesia from the fall and is rescued by a carpenter — played by her real-life longtime love, Kurt — who convinces her she is his wife and the mother of their four rowdy sons.

In this hilarious comedy, Goldie crosses paths with her former fiancé — played by Mel Gibson — 15 years after he entered the witness protection program for helping convict a drug-dealing FBI agent.

The actress perfectly portrayed a woman with con-artist tendencies who worms her way into the heart of a stodgy architect, played by actor Steve Martin, by claiming to be his wife in this adorable rom-com.

Goldie, Meryl Streep, Bruce Willis and Isabella Rossellini made up the all-star cast of this dark comedy fantasy film that followed a childish pair of rivals (Goldie and Meryl) who drink a magic potion that promises eternal youth.

A.k.a. the best movie ever! The First Wives Club stars Goldie, Diane Keaton and Bette Midler as three divorced women who seek revenge on their ex-husbands who left them for younger women.

In The Banger Sisters, Goldie played Suzette, a middle-aged woman who reunites with her old friend Vinnie, played by Susan Sarandon, to reflect on their younger days as wild groupies!

Goldie made her return to the big screen in 2017 when she starred opposite Amy in Snatched. The movie star played the role of a mom who accompanies her newly-single daughter on an exotic getaway to South America. While the mother-daughter duo were hoping to enjoy some R&R, their trip quickly turns into a wild and dangerous jungle adventure.