Photographer Alexi Lubomirski, who took Prince Harry and Meghan Markle‘s iconic engagement photos and wedding photos, recently revealed that the plane he was on nearly crashed while on the way to shoot Once Upon a Time … in Hollywood for Esquire magazine.

“Well this was a cool day!” the 44-year-old photographer captioned a series of posts shared to Instagram over the last few days. “One month ago, after nearly crashing in our plane, taking off from JFK [airport in New York City], and staying awake all night in the airport waiting for the replacement flight, we got a last minute flight to Los Angeles, went straight to the shoot location and into one of the coolest shoots I have done in a while!” 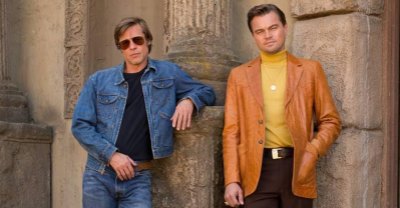 In another series of pics he shared taken for the magazine’s spread, Alexi recalled the day on set with the three film legends. “After shooting the cover story for @esquire with Leonardo, Brad and Quentin, I hung around and documented them all being interviewed by @Esquire’s @Michael_Hainey. Pretty cool experience being in the room with these three talking about [the project].”

Once Upon a Time … in Hollywood stars Leo, 44, as Rick, a fading TV star, and Brad, 55, as Cliff, the actor’s stuntman, who try to make it big in movies during the Golden Age in 1969 Los Angeles. It also features the tragic story of actress Sharon Tate (Margot Robbie) who, along with several others, was butchered to death by the followers of Charles Manson. It was written and directed by Quentin, 56.

“I’ve been working on this script for five years, as well as living in Los Angeles County most of my life, including in 1969 when I was 7 years old,” Quentin recently said in a statement. “I’m very excited to tell this story of a Los Angeles and a Hollywood that doesn’t exist anymore. And I couldn’t be happier about the dynamic teaming of [Leo] and [Brad] as Rick and Cliff.”

“The film is a story that takes place in Los Angeles in 1969, at the height of hippy Hollywood. The two lead characters are Rick Dalton [Leo], former star of a Western TV series, and his longtime stunt double Cliff Booth [Brad],” Quentin explained. “Both are struggling to make it in a Hollywood they don’t recognize anymore. But Rick has a very famous next-door neighbor … Sharon.”

Once Upon a Time … in Hollywood hits theaters nationwide on July 26.

Timothy Olyphant Remembers Costar Luke Perry in ‘Once Upon a Time in Hollywood’: 'I’m Going to Miss Him'

Brad Pitt Recalls Working With 'Once Upon a Time in Hollywood' Costar Luke Perry: 'He Was so Incredibly Humble'
Video

Actress Deidre Hall Reflects on ‘the Longevity’ of Her Career