It’s no surprise Queen Elizabeth has one of the most iconic transformations ever. Aside from being the longest-reigning monarch in British history, she has accomplished a lot throughout her life at Buckingham Palace.

Even before she ascended to the throne many decades ago, Elizabeth — who was born on April 21, 1926 — worked her way toward becoming the Queen of England. From her royal wedding to Prince Philip in 1947, her coronation in 1953 and the births of her four children, she has proven to be one of the most regal royals out there. 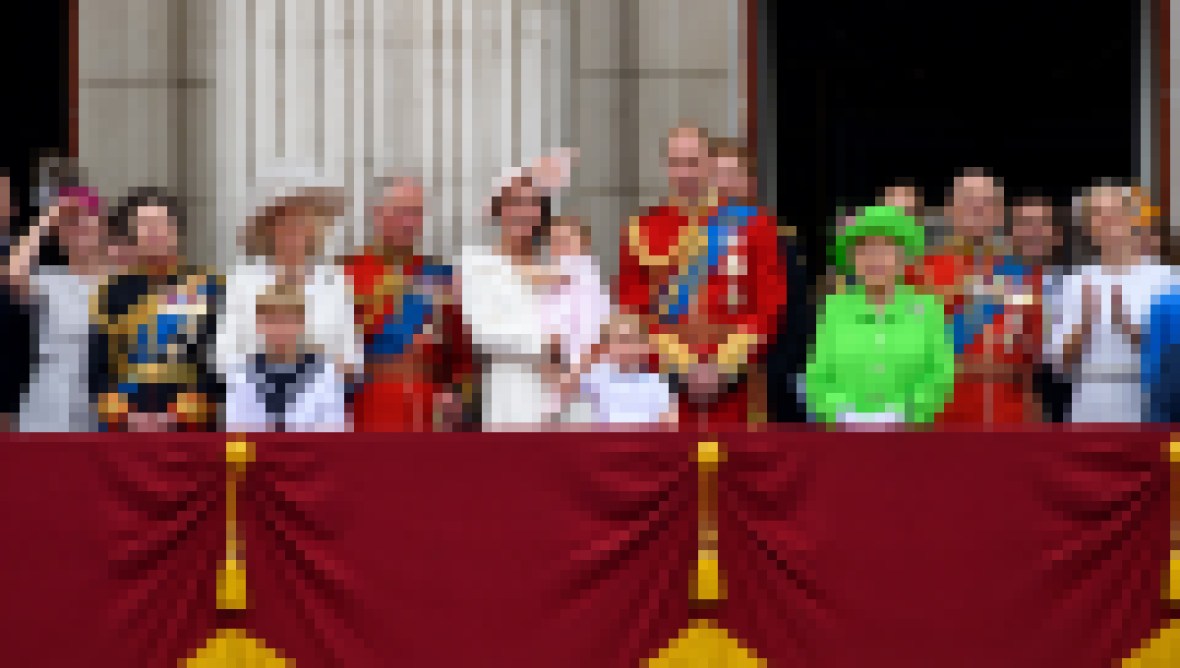 Now that she’s older, however, the queen is beginning to focus on the later stages of her life, which include transitioning out of her role. A source close to the royal family exclusively told Closer Weekly that Elizabeth has been preparing Duchess Kate (née Middleton) for the throne ever since her 2011 marriage to Prince William.

As royal admirers know, the queen’s grandson, the Duke of Cambridge, is second in line to the throne behind his dad, Prince Charles. Because the Duchess of Cambridge will stand as queen alongside her husband one day, “Kate’s learning all the ins and outs,” the source shared in February 2020.

Get to Know Queen Elizabeth's 8 Great-Grandchildren!

“The queen admires her professionalism, commitment and ability to take royal life in stride without getting flustered,” the insider continued. In order to groom Kate for the role, the royal icon has been giving her granddaughter-in-law some insider advice while spending extra time together.

“Elizabeth has told Kate never to speak in public about any drama surrounding the family,” the source explained. “Instead, the palace always communicates through statements that should be short and factual … Kate has learned a great deal.”

Considering the gorgeous duchess is learning all about being a leader from the queen herself, it’s no surprise the source dished Elizabeth couldn’t be more proud of her future successor.

“She is impressed by the way Kate has grown into her role,” the insider told Closer. “Her warm and caring personality has made her one of the most popular royals of all time. Elizabeth has no doubt that one day Kate will be a great queen.”

Still, no one can replace Elizabeth and her legacy.

Scroll down below to see the ultimate transformation of the queen through the years!

The future Queen is pictured in one of her first portraits.

You might not know this, but Elizabeth actually met her real-life Prince Charming when she was just 8 years old! The queen was introduced to the cousin of the bride, Philip Mountbatten — who was just 13 — when they both separately attended the royal wedding of Prince George and Princess Marina of Greece and Denmark.

Elizabeth, known as Princess Elizabeth at the time, can be seen posing with her newly-coronated father, King George VI, her mother, Queen Elizabeth, and her sister, Princess Margaret. The royal family looked as regal as ever in their official coronation robes.

Elizabeth was just 14 years old when this family portrait was taken of her, father George, mother Elizabeth and sister Margaret.

Almost 13 years since meeting for the first time, Elizabeth and Philip — who was the future Duke of Edinburgh at the time — announced their engagement at Buckingham Palace. Look at the young love birds!

On the day of the royal wedding on November 20, 1947, the stunning bride wore a floral-embellished satin dress designed by Norman Hartnell. Elizabeth paired her gorgeous wedding gown with a flashy diamond tiara and a 13-foot veil with a star design.

Barely even three months after their nuptials, Elizabeth — who was still a princess at the time — became pregnant with her and Philip’s first child. On November 14, 1948, Elizabeth and her husband welcomed their first royal child, Charles.

Following his arrival, lookers waited outside Buckingham Palace to read the official bulletin that announced the birth of Charles, Prince of Wales.

At just 25 years old and as a mother of two, Elizabeth was coronated as the Queen of England on June 2, 1953, at Westminster Abbey after ascending to the throne upon her father’s death on February 6, 1952.

She waved to the crowds of people from the balcony at Buckingham Palace following the coronation.

Charles admired his baby brother, Prince Andrew, Duke of York, shortly after parents Elizabeth and Philip welcomed him on February 19, 1960. So cute!

“The Queen has had a comfortable night. Her Majesty and the baby are both well,” the birth notice read outside the palace.

Elizabeth led the Investiture of the Prince of Wales at Caernarfon Castle in North Wales in July 1969. Charles was just 19 years old at the time.

Anne tied the knot with her first husband, Mark Phillips, on November 14, 1973. Elizabeth wore a gorgeous blue ensemble for the special day.

She’s a grandmother! Elizabeth admired Anne and her first grandson, Peter Phillips, after he was born on November 15, 1977. Peter, 42, has been married to wife Autumn Phillips since 2008 and they share their two children, Savannah Phillips and Isla Phillips.

Anne welcomed her second child, Zara Phillips, on May 15, 1981. Besides being a member of the British royal family, Zara, 38, is also an equestrian, Olympian and mom of daughters Mia Grace Tindall and Lena Elizabeth Tindall with husband Mike Tindall.

Grandchild No. 3! Charles and Diana became parents after they welcomed their first royal child, son William, on June 21, 1982.

The queen can be seen saluting her guards at the annual Trooping the Colour ceremony outside Buckingham Palace in June 1983. Back in the day, Elizabeth would ride in on horses. Today, she makes her arrival in a horse-drawn carriage.

William gets a little brother! Diana and Charles welcomed their second child and the queen’s second grandchild, Prince Harry, Duke of Sussex, on September 16, 1984.

Elizabeth and Philip’s son Andrew tied the knot in an incredible royal wedding in July 1986. The queen celebrated her son’s nuptials to Sarah Ferguson, who became Sarah, Duchess of York, as they waved to the crowds of people on the balcony of Buckingham Palace following the lavish ceremony.

Fergie and Andrew welcomed their first child and the queen’s third grandchild. On August 8, 1988, Princess Beatrice of York was born.

Royal baby No. 2! Andrew and Fergie became the parents of two after the arrival of Princess Eugenie of York on March 23, 1990.

After divorcing from her first husband, Mark, Anne remarried now-husband Timothy Laurence during a ceremony on December 12, 1992.

Although the previous years brought along joy and babies, 1997 brought a lot of heartbreak to the royal family. In August 1997, Elizabeth mourned the loss of Diana, who tragically passed away after a car accident in Paris at the age of 36. The queen looked broken-hearted as she attended the funeral.

Elizabeth looked stunning in her purple gown as she celebrated the royal wedding between her youngest child, Prince Edward, and his bride, Sophie Rhys-Jones — who became Sophie, Countess of Wessex. Edward and Sophie ultimately became the parents to daughter Lady Louise Windsor and James, Viscount Severn.

Nearly seven years following Diana’s death, Charles remarried his now-wife, Camilla Parker Bowles — who became Camilla, Duchess of Cornwall — in April 2005. Elizabeth and other members of the family smiled for a formal portrait with the family at Windsor Castle.

Elizabeth celebrated a grandchild’s first royal wedding on April 29, 2011. The beloved royal wore a yellow monochromatic ensemble as she attended the nuptials between William and Kate — who actually kept her name instead of receiving a royal title.

Wow! The queen celebrated her Diamond Jubilee, which marks the 60th anniversary of her coronation. To honor the incredible accomplishment, she and her family rode the Royal Barge during the Thames Diamond Jubilee Pageant.

Two years after George’s birth, Will and Kate welcomed their first daughter, Princess Charlotte of Cambridge on May 2, 2015.

Wow! A third royal child was celebrated on April 23, 2018, after Prince Louis of Cambridge was welcomed. Louis is Elizabeth’s 7th grandchild — incredible!

Elizabeth and the rest of the royal family celebrated Harry’s royal wedding to Meghan Markle on May 19, 2018. Their wedding was one to die for!

Meg and Harry weren’t the only ones with a blowout royal wedding in 2018! Months later, the queen’s granddaughter Eugenie got married to now-husband, Jack Brooksbank. Eugenie’s wedding was immaculate!

Elizabeth looked happier than ever while meeting the newest royal baby, Archie Harrison Mountbatten-Windsor. The great-grandmother met the little bundle of joy just days after Meghan and Harry welcomed the little guy on May 6, 2019.

Elizabeth was joined by members of the royal family as they attended the remembrance ceremony in London to honor the service men and women who scarified their lives in war. The queen stood with Kate and Camilla as they commemorated the 101st anniversary since the end of World War I on November 10.

The gray-haired beauty was all smiles as she paid a visit to the Royal Air Force station and military airbase in the U.K. in February. Elizabeth sported an orange-patterned peacoat and matching hat as she watched aircrews work on a training model. She also inspected the new integrated training center!

The iconic monarch donned a beautiful green dress with long sleeves as she made a rare televised speech regarding the coronavirus pandemic. Elizabeth offered some words of comfort as she appeared from her home at Windsor Castle in the U.K. on April 5.

“I am speaking to you at what I know is an increasingly challenging time. A time of disruption in the life of our country: A disruption that has brought grief to some, financial difficulties to many and enormous changes to the daily lives of us all,” she urged. “I want to thank everyone on the NHS front line, as well as care workers and those carrying out essential roles, who selflessly continue their day-to-day duties outside the home in support of us all. I am sure the nation will join me in assuring you that what you do is appreciated and every hour of your hard work brings us closer to a return to more normal times.”

Elizabeth and Philip honored their 73rd wedding anniversary on November 20, 2020. The couple posed for photos in their signatures ensembles while marveling over a homemade card their grandchildren George, Charlotte and Louis made in honor of their special day.

Elizabeth’s anniversary with her longtime hubby comes weeks before Buckingham Palace announced she canceled her annual Christmas celebration. “Having considered all the appropriate advice, The Queen and The Duke of Edinburgh have decided that this year they will spend Christmas quietly in Windsor,” a Buckingham Palace spokesperson said in a statement.

Two months earlier in September, a source revealed the royals were considering putting their traditional event on hold in fear “it’ll be very risky.” Because of the ongoing COVID-19 pandemic, “royal aides are warning her that it’s not a good idea,” the insider told Closer.

Even though Elizabeth “would love [nothing] more than to see her family reunite,” she understands how serious of a matter this is. “She’s coming up with a plan B,” the source noted. “Some sort of smaller gathering with very close family.”

Pretty in Pink! Queen Elizabeth Stuns in Coat Dress With Matching Hat at Day 4 of Royal Ascot — See the Pics!