For the past two decades, Heidi Klum has proclaimed herself as the Queen of Halloween thanks to her lavish parties in New York City. Over the years, we’ve witnessed the iconic supermodel dress up in some of the most elaborate costumes Hollywood has ever seen.

Since kicking off her Halloween celebrations with an annual bash in 2000, the 46-year-old beauty has been joined by some of the hottest stars, including Jennifer Lopez, Jessica Alba and many more, to celebrate one of the most fun nights of the year. 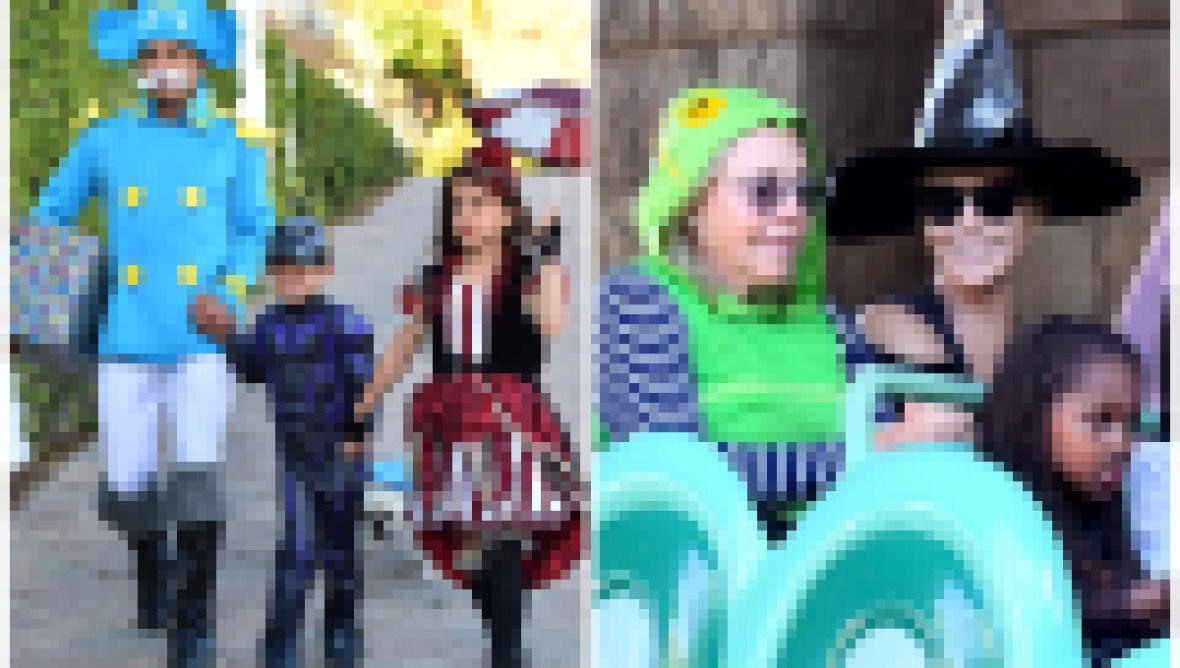 See All the Best Celebrity Halloween Costumes for 2019!

Even though Heidi’s star-studded guest list steps out in some of the most epic ensembles, the former America’s Got Talent judge always seems to have the most eye-catching and over-the-top costumes. Last year, she and her then-fiancé Tom Kaulitz dressed up as Shrek and Fiona from Disney’s Shrek.

Prior to unveiling her horrifying alien costume at her 20th annual party on October 31, fans were dying to know what the blonde beauty dreamed up for this year. In mid-August, Heidi gave her Instagram followers a sneak peek inside her 2019 Halloween prep as she shared a video from her fitting.

“HALLOWEEN preparation 😛… don’t move a muscle!!!!!!!!!!” the beloved TV personality wrote on social media, adding the hashtags, “Heidi Klum Halloween” and “Heidi Klum Halloween 2019.” In the clip that she shared, Heidi can be seen carefully standing in lingerie and heels while one of her team members took pictures of her body for measurements.

At the time, fans of the Victoria’s Secret Angel flooded the comment section begging the actress for any hint of her formerly-disclosed ensemble. “OMG what’s it gonna be?! You are the queen of Halloween,” one user wrote, while another echoed, “Can’t wait to see what you come up with this year!!!” A third chimed in, gushing, “You always put so much effort in your costumes! I love it!”

Considering Heidi has topped her former costumes as Halloween comes around again each year, fans weren’t surprised when she unveiled her gory, bloodied-up alien costume at her most recent party.

In honor of another incredible “Heidi Klum Halloween” extravaganza, scroll through the gallery below to check out her most recent costume, as well as each ensemble from over the last 20 years!

After 10 hours sitting in a chair surrounded by an army of makeup artists and designers, Heidi unveiled her highly anticipated costume for 2019! The beloved model revealed her alien ensemble alongside her husband, Tom, as they stepped out for her 20th annual Halloween bash in NYC on October 31.

Considering Heidi teased her prosthetic-heavy get up for over a month, fans were blown away when she hit the red carpet in her nearly nude, bloodied costume with guts, brains and wires throughout the entire bodice. It looks like Heidi had no issue protecting her title as our Halloween queen!

Heidi and Tom stepped out as Shrek and Fiona in 2018. The sweet couple looked so convincing, we would’ve mistaken them for the real characters!

The blonde beauty channeled Michael Jackson as she dressed up as the werewolf from the iconic singer’s 1982 music video for his hit song “Thriller.”

Which one is Heidi!? The former Project Runway star stepped out alongside a sea of mini-mes for her 2016 Halloween bash.

Wow! Heidi looked totally unrecognizable as she stepped out in a Jessica Rabbit costume in 2015. The TV star perfected the look inspired by Who Framed Roger Rabbit? by enhancing her figure with prosthetics, bold makeup and the character’s signature red dress.

Heidi looked like a gorgeous, colorful butterfly as she attended her annual Halloween party in 2014. The mom of three stepped out donning an elaborate butterfly ensemble equipped with massive wings.

Heidi took a trip to the future as she dressed up as an old lady version of herself. The Germany native’s costume looks so convincing thanks to the impressive details of her makeup.

Heidi dressed up as Cleopatra while attending her annual Halloween party in 2012. The Ella Enchanted actress was glowing as she wore the super intricate, gold-detailed costume that featured a vibrant gown, cloak and headpiece.

While attending her first of two parties in 2011, Heidi stepped out as “the Visible Women” as she wore a skeleton jumpsuit from head to toe. She was so committed to the costume, Heidi even had two men dressed as surgeons wheel her out on the red carpet on a gurney. LOL!

During the second night of her 2011 festivities, Heidi stepped out alongside her then-husband Seal. The former couple — who tied the knot in 2005 but divorced in 2014 — looked super hilarious as they wore matching ape costumes!

Heidi effortlessly pulled off her unique robot costume as she attended her party in 2010. We give the Sports Illustrated model credit for wearing stilts and purple latex all night!

Heidi and Seal opted for animal costumes as they stepped out as crows in 2008. The former pair looked incredible as they donned the black-feathered ensembles.

Wow! Heidi took her creativity to the max as she dressed up as Kali, the Hindu goddess of death and time, in 2008. We can’t get over how elaborate this multi-arm costume is!

Heidi dressed as a super cute — and feisty — kitty kat for her Halloween bash in 2007.

Heidi dressed up as the Forbidden Fruit, while Seal donned an Eve costume in 2006.

Heidi put her own twist on the typical Vampire costume as she stepped out wearing a black leather minidress and heeled boots. The actress also donned a large head of black hair and flashed her massive Vampire wings.

Like her Vampire number, Heidi took a different approach for her Witch costume. Instead of opting for the typical all-black get-up, the blonde bombshell wore a red ensemble with skeletons and brooms. This is so cute!

Heidi had all eyes on her as she wore a gold, Gladiator-like costume in 2003. The metallic outfit even featured gold grills on her teeth!

Heidi dressed up as Lady Godiva alongside her first husband, Ric Pipino, in 2001. The former couple — who married in 1997 but called it quits in 2002 — looked incredible as they channeled their inner English folklore.

Heidi even came into the party on a horse!