The story of the family Skywalker is coming to an end with this December’s release of Episode IX of the Star Wars saga — given the title The Rise of Skywalker. So it seems that while the Skywalker story concludes, there is apparently a Skywalker who is nonetheless rising? Confusing it is, as Yoda would say.

Unfortunately, little else is known about the movie, beyond the fact that we’re seeing the return of Rey (Daisy Ridley), Finn (John Boyega), Poe (Oscar Isaac), Kylo Ren (Adam Driver). On top of that, there’s the return of both Luke (Mark Hamill), Leia (the late Carrie Fisher) and Billie Dee Williams as Lando Calrissian. The Force Awakens‘ J.J. Abrams returns as director.

The new trailer for the film made its debut at Disney’s annual D23 expo, much to the excitement of fans. This follows on the heels of Disney president Bob Iger’s earlier comment to investors that, after the release of this chapter, the franchise is taking a bit of a break from the big screen.

“We have not announced any specific plans for movies thereafter,” Iger told Bloomberg. “There are movies in development, but we have not announced them. We will take a pause, some time, and reset because the Skywalker saga comes to an end with this ninth movie. There will be other Stars Wars movies, but there will be a bit of a hiatus.” 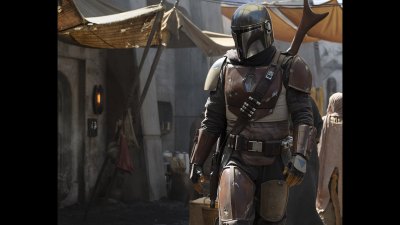 Fans who can’t get enough of Star Wars, however, shouldn’t be discouraged. While we don’t know anything about the plot of The Rise of Skywalker, we do know the franchise will play an important role on the studio’s November-launching Disney+ streaming service — with no less than four TV series.

Available at launch will be The Mandalorian, the first live-action Star Wars series, written and executive produced by Jon Favreau, with Dave Filoni (Star Wars: The Clone Wars) directing the first episode. The highly anticipated series features an all-star cast including Pedro Pascal, Gina Carano, Carl Weathers, Giancarlo Esposito, Emily Swallow, Omid Abtahi, Werner Herzog and Nick Nolte. Set after the fall of the Empire and before the emergence of the First Order, the series follows a lone gunfighter in the outer reaches of the galaxy far from the authority of the New Republic. We’ll also see the continuation of the enormously popular animated series The Clone Wars in year one.

Year two will see the arrival of a prequel series to the film Rogue One: A Star Wars Film, described as follows: “Diego Luna will reprise his role of rebel spy Cassian Andor in this series set during the formative years of the Rebellion. The rousing spy thriller will explore tales filled with espionage and daring missions to restore hope to a galaxy in the grip of a ruthless Empire. Alan Tudyk will also reprise his role as K-2SO with Stephen Schiff (The Americans) as showrunner and executive producer.

Also announced at D23 is the fact that Ewan McGregor will be getting a new Obi-Wan Kenobi series on the service as well, reprising the role he played in Episodes I-III (The Phantom Menace, Attack of the Clones, Revenge of the Sith).

Star Wars: The Rise of Skywalker will hit theaters on December 20.

Of Carrie Fisher’s Return in the New ‘Star Wars’ Film, Director J.J. Abrams Says, ‘She Is the Heart of This Story’

The Women Of 'Star Wars' Finally Come To Power — And It's About Time! (EXCLUSIVE)

Barbara Walters Was ‘Close’ to Daughter Jackie Before Death at 93

Hot in Cleveland's Wendie Malick: Show Was a 'Delightful Surprise'

‘Self-doubt’: Inside Paul McCartney’s Life After the Beatles Split

Marie Osmond’s Grandkids Watch Her Perform, Wave to Her on Stage

Sandra Dee Was ‘Grateful’ for Son Dodd After Facing Heartbreak