One of the greatest comedy teams of the 20th Century was Stan Laurel and Oliver Hardy, who were the subject of the heartwarming tale of their later years, Stan & Ollie, which is premiering on iTunes, Amazon Video, DVD and Blu-ray on Tuesday, March 26. In addition, comes word that fans around the world — and there are many of them — can now have the opportunity to obtain original memorabilia devoted to the duo from Hollywood’s leading auction site, Screenbid.

Screenbid recently unearthed a collection of Laurel & Hardy collectibles that go as far back as the 1920s when the comedy team first began working together and spans the globe. There are reportedly hundreds of items available that will appeal to both newbie and veteran collectors who want to own a part of Stan and Ollie’s rich heritage. 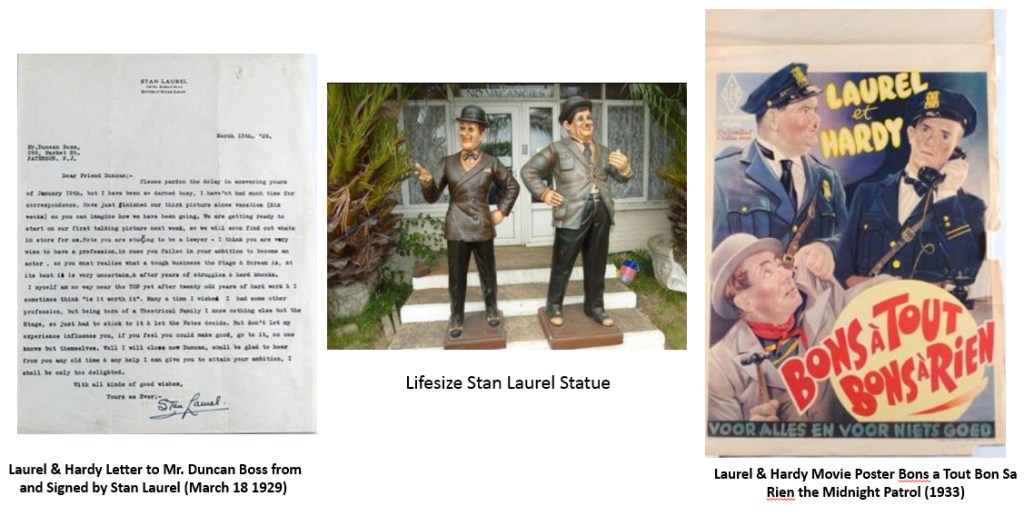 To get a sense of what’s available, the auction items include personalized and autographed letters from Stan Laurel, Oliver Hardy and film producer Hal Roach sent to fans spanning five decades; original press books (movie advertising campaign material), including Babes in Toyland, Swiss Miss, and Atoll K; Walt Disney Studios sketches of Laurel & Hardy, Domestic and Foreign Posters for their feature films and some of the two-reel short subjects, among them “Twice Two,” “The Midnight Patrol” and “Going Bye, Bye;” STAX publicity photos, and life-size Statues of both Stan and Ollie.

As if this wasn’t enough, Screenbid will have original Stan and Ollie lobby cards, posters, press clippings, inserts, standees, comic books and so much more from the team’s silent and sound films. All merchandise will be sold with an official Studio Certificate of Authenticity.

Laurel and Hardy first began working together as a team for Hal Roach in the 1927 short film “The Second Hundred Years,” and continued making shorts in between features until 1935’s “Thicker Than Water.” Much to the delight of their fans, they made quite a number of films, including Sons of the Desert, Bonnie Scotland, The Bohemian Girl, Way Out West, The Flying Deuces and A Chump at Oxford.

Steve Coogan, who played Laurel in Stan & Ollie, says of the duo’s appeal, “It was very accessible to a child. A pure kind of comedy that is to do with character, not situation. There are no real consequences. It’s a happy world.”

Made even happier by potentially owning a piece of that world, as offered by Screenbid.

'The Wonder Years' Cast Donates Show Memorabilia to the Smithsonian!

Inside Jayne Mansfield's Life as a 'Good' Mom: She 'Cared So Much'

How Doria Ragland Has Been Supporting Meghan Markle Through 2nd Pregnancy