Generally speaking, there are two kinds of sitcoms. The first are the so-called joke machines, more concerned about punchlines than how they get to them. The others are the ones in which the humor arises from character; people we’ve gotten to know who are doing or saying funny things. That is the category I Love Lucy falls into, which separates it from many other comedies of its era. This is reinforced beyond the core characters of Lucy and Ricky Ricardo (Lucille Ball and Desi Arnaz) and Ethel and Fred Mertz (Vivian Vance and William Frawley). There are supporting players appearing in a number of episodes that add to the reality the show is creating. One of them is Elizabeth Patterson, who plays Little Ricky’s babysitter, Mrs. Trumbull, and became one of the more beloved members of the company. 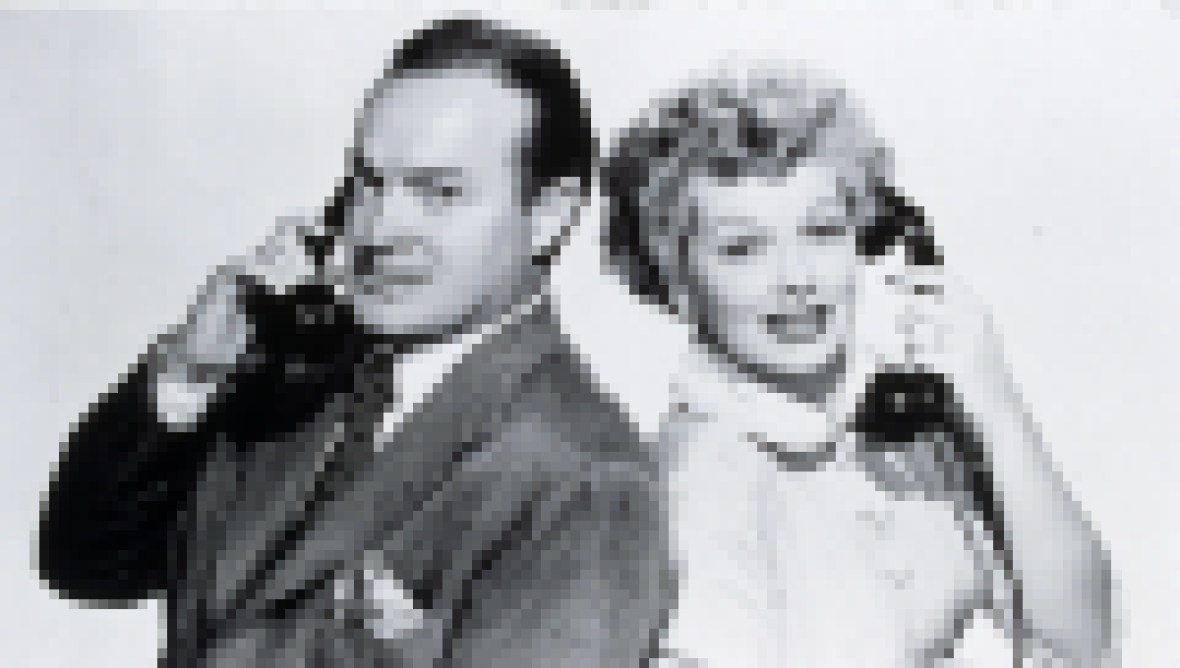 EXCLUSIVE: In the 1960s, ‘I Love Lucy’ Star Lucille Ball Hosted Her Own Radio Interview Show, ‘Let’s Talk to Lucy’

Explains Michael Karol, author of Lucy A to Z: The Lucille Ball Encyclopedia, “I Love Lucy was so popular in the 1950s, and remains so to this day, that it created a unique show-business paradox: Actors who had long, successful careers before and after they appeared on the show — actors who’d won Oscars (William Holden, Orson Welles), those who went on to become way more famous in other showbiz ventures (producer Aaron Spelling, voice actress Janet Waldo) — are very often recognized most by the public due to their appearances on the classic sitcom. This is the case with Elizabeth Patterson, who had a showbiz career any actor might envy, but is best remembered as the Ricardos’ neighbor, Mrs. Matilda Trumbull, on I Love Lucy.”

Geoffrey Mark, author of The Lucy Book: A Complete Guide to Her Five Decades in Television, elaborates, “Her nickname was Patty Patterson. Nobody called her Elizabeth. She was one of those Dames who had been on radio and the Broadway stage and a million movies, but had never become a star. She was one of those wonderful character people who you saw pretty much everywhere. One example is that while she was Mrs. Trumbull, she was on the George Reeves series The Adventures of Superman.”

Please scroll down to learn more about Elizabeth Patterson and Mrs. Trumbull.

Mary Elizabeth Patterson was born November 22, 1874 in Savannah, Tennessee. Her parents were Mildred and Edmund D. Patterson, the latter a veteran of the Confederate army who was a lawyer. Elizabeth was the second of four children born to the family, with older sister Annie Belle and younger brothers Edmund and Archie. She would go on to study at Tennessee colleges in both Pulaski and Columbia, which is where she would discover a passion for drama by taking part in campus theater groups. So against this idea were Mildred and Edmund, that they sent her to Europe in the belief it would dissuade her from acting. Unfortunately for them, that trip only made her determination stronger. Upon her return home, and being in receipt of a small inheritance, she decided to move to Chicago, where she joined a theatrical troupe — which ultimately allowed her to tour with repertory companies.

In 1913, Elizabeth debuted on Broadway in the play Everyman. Between then and 1954’s His and Hers, she appeared in a total of 26 shows, others including Spellbound, Rope, Her Master’s Voice and Yankee Point. On top of that, between 1926’s The Boy Friend and 1960’s Tall Story, she appeared in over 100 films. Television was actually kept to a minimum for her. Besides I Love Lucy, she only guest starred on two episodes of The Adventures of Superman and Alfred Hitchcock Presents. Says Michael Karol, “She was one of those dependable character actresses who you would see on screen and go, ‘I know I’ve seen her before!’ In Patterson’s case, she was pretty much everywhere. She often played a neighbor, aunt, grandmother or landlady, and her better known films include Dinner at Eight [1933], the Bulldog Drummond series in the late 1930s, My Sister Eileen and I Married a Witch [both 1942], Little Women (1949) and Pal Joey [1957].”

Lady of the South

Adds Geoffrey Mark, “She was born in Savannah, Tennessee, which is where she gets that lovely light Southern accent she had. In the 1920sm she was a regular on the Broadway stage but, when talkies came in, they needed women who could actually talk. As a result, people were being hired in the early talkies more for their abilities to speak well than for their looks. And because she had a Broadway career and that wonderful accent, they used her a lot. But she was already 51 years old by the time she got into films and she just continued, playing really wonderful characters, and then she came to play Mrs. Trumbull. She made her first appearance on the show when she was 74 and her last appearance when she was 80.”

Points out Michael, “Though dainty appearing, almost frail, she was feisty when it was needed, and that unique duality of appearance vs. character made her a Hollywood treasure.”

“Elizabeth Patterson was initially cast by Lucille Ball and Desi Arnaz in the I Love Lucy episode ‘The Marriage License,’ which first aired April 7, 1952. Patterson played Mrs. Willoughby, wife of a Greenwich, Connecticut justice of the peace who remarries Lucy and Ricky,” says Michael. “Patterson memorably warbled an off-key version of ‘I Love You, Truly’ during the ceremony, which was ‘truly’ unforgettable. It must’ve been a snap for Ball after that episode to remember Patterson when the series needed a capable and sympathetic character actress to play the Ricardos’ neighbor, who would be free to babysit Little Ricky when the plot demanded it.”

The Arrival of Mrs. Trumbull

When Lucille Ball found herself pregnant, she and Desi decided to weave the pregnancy into I Love Lucy, which not only became a genuine pop culture event, but eventually led to the birth of Little Ricky (played first by Michael Mayer and then Richard Keith). The character of Mrs. Trumbull first appears in the April 20, 1953 episode of I Love Lucy, “No Children Allowed.” Says Michael, “In that episode, Mrs. Trumbull objected to the presence of Little Ricky, particularly his constant crying in their apartment building, which didn’t allow children (can you imagine such a thing today?). In full curmudgeon mode, Patterson threatened to force the Mertzes to enforce the no-children clause. Ethel stands up for her best friends, but when when the Ricardos and Mertzes end up fighting and leave Little Ricky alone in the apartment, Mrs. Trumbull enters and takes control of the situation, Patterson revealing another, nurturing side to the character. As the feuding neighbors realize they left Little Ricky alone, they rush back, only to find him in the arms of Mrs. Trumbull, rocking him gently and cooing, ‘Don’t worry, dear, you’ll never be left alone again.’ The episode had it all; it was hilarious and touching and Patterson made Mrs. Trumbull by turns infuriating and endearing. As a result, she became fast friends with our fab foursome, and was from then on the go-to babysitter for Little Ricky.”

“The scripts give us very small pieces of information of trivia,” muses Geoffrey. “First of all, we know that she is upstairs from the Ricardos when they’re living on the fourth floor. So we now know that the Mertz’ apartment building is at least five stories — which means that Ricky and Lucy were walking up four flights of stairs to get to the apartment they were in before she gets pregnant. They moved downstairs to the third floor for the rest of the series. Mrs. Trumbull is one or two flights off from them and the roof is above that. She must have been a pretty fit lady to be able to handle that.”

Respect for the Lady

He continues, “All of the other characters showed great respect to the Mrs. Trumbull character, which added something to them, because we’re seeing these four people who do crazy s–t, but still respect their elders. They take pleasure at how much she’s able to do at her age and how current she stays with things. They sort of shake their head and smile, like, ‘Wow, this woman still has it,’ which makes us like them even more. That’s called writing good characters.”

When You’ve Got to Get Rid of the Kid …

“When Mrs. Trumbull says Little Ricky will never be alone again, it gave them an opening that should they need to get rid of the kid for a plot point — and they used it often — they could say, ‘Oh, the baby’s with Mrs. Trumbull,’” laughs Geoffrey, “which is a lot better than leaving the kid alone. They were going to need a place to put the child so that the Ricardos don’t look like bad parents. Now they can go to dinner with the Mertzes without someone saying, ‘Where the hell is Little Ricky?’ Mrs. Trumbull appeared in every season starting with season 2, and the reason for that is that she was charming and loving. They wrote a character with heart and that, combined with what Patty brought to the role, made the audience fall in love with her.”

During her 35-year film and TV career, Elizabeth, who never married, lived at the Hollywood Roosevelt Hotel. She died from pneumonia at the age of 91 on January 31, 1966.