Eddie Murphy is famous for his big brood, but he’s not the only guy in Hollywood who has a lot of children. To date, the comedian has welcomed 10 kids, and while he loves being a dad, caring for a large family certainly has its hurdles.

“Men kind of look at me like, ‘He’s crazy. How much did that s–t cost?’” he joked during a previous appearance on The Ellen DeGeneres Show. We can only imagine, but with an estimated net worth of $200 million, we’re sure it’s no problem. He recently became a grandfather for the first time as well, and couldn’t help but gush over his newest role. “I like it, I’m happy with it,” he said. 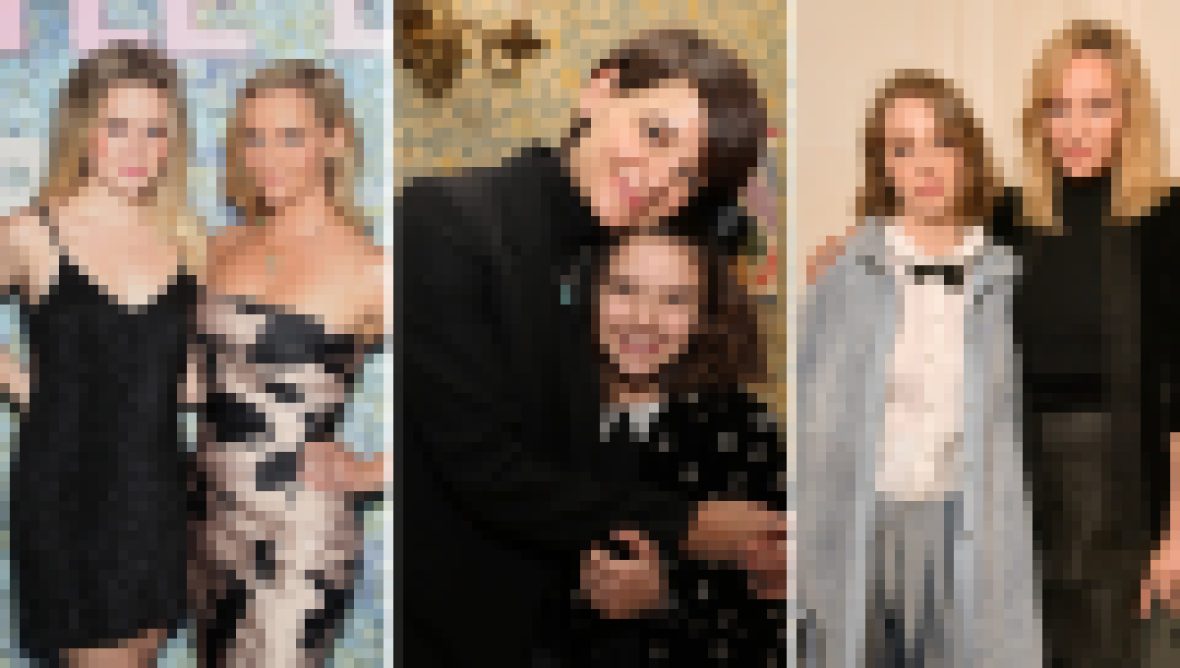 These Celebrities and Their Kids Are Spitting Images of Each Other — Check It Out!

With such a big family, you might think the actor would be ready to give up his career in Hollywood to focus on being a stay-at-home dad, but it’s actually the opposite. He’s been working harder than ever to support his big family. The Nutty Professor star was nominated for an award at the 2020 Golden Globes for his performance as comedian Rudy Ray Moore in Netflix’s Dolemite Is My Name.

But he’s not the only Hollywood star with a huge, supportive family behind him. There are plenty of other A-listers who made their many kids their priority. Angelina Jolie and Brad Pitt‘s brood clocks in at six kids, the same amount Madonna has. Donnie and Marie Osmond both have a swarm of now-adult children (and several grandkids, too!) Donnie is the proud dad of five kids, while his sister has eight.

Sadly, Marie’s son Michael died in 2010. If it weren’t for her big family,  the singer admits she would have struggled to carry on. “With my son, to get through that, I sang — and a lot of people judged me for going back to work so quickly,” she said. “But I have seven other children who needed to keep living and that was how I processed my pain. Music is a powerful thing. When you stop loving music, you die. Music has always been there for me, through the highs and the lows.”

Scroll below to see a few celebrities who have some of the largest families in Hollywood!

The Norbit actor has two kids with fiancée Paige Butcher, five children with ex-wife Nicole Mitchell Murphy, a son from a relationship with Tamara Hood Johnson, another son with Paulette McNeely and one daughter with former Spice Girls star and TV personality Melanie “Mel B” Brown. Whew!

Just like Eddie, Rod Stewart also has a big family! He’s currently wed to wife Penny Lancaster and together they share two kids. However, in 1963, Rod welcomed his first child, Sarah Streeter, into the world with ex Susannah Boffey.

Although the couple later gave their kid up for adoption, the singer went on to have two more children with ex-wife Alana Stewart, a daughter with Kelly Emberg and then two more kids with ex-wife Rachel Hunter. That’s all before he met Penny.

In all, the “Winter Wonderland” singer has eight kids.

Madonna is one of the biggest pop stars in the world and a proud mom of six to kids Lourdes, Rocco, David, Mercy, and twins Estere and Stelle.

During a previous appearance on The Graham Norton Show, she said being famous has been a huge burden on her children. “I think they wish I wasn’t Madonna,” the “Like a Prayer” singer said. “I think it would be less challenging, in their minds, if they didn’t have me as their mother.”

Even with all the money in the world, we’re sure the singer’s children wouldn’t trade their experiences with their mom for anything!

It’s no secret Angelina Jolie puts her six children —  Maddox, Pax, Zahara, Shiloh, and twins Knox and Vivienne — with ex-husband Brad Pitt before anything else!

“My children know my true self, and they have helped me to find it again and to embrace it,” she recently told Harper’s Bazaar. “They have been through a lot. I learn from their strength.”

During a previous interview with Closer, Alison revealed her favorite thing about her dad. “He makes me laugh, I make him laugh. That’s my favorite part about it,” she gushed. “I think just having a lot of laughter, especially in our family, amongst ourselves. We’re all getting older.”

Let’s get right to it. Donny Osmond has one large family and, in this photo, it only shows him, his wife, Debbie Osmond, and some of their grandchildren (they have 12 in total). The singer is also a dad of five to sons Donald, Jeremy, Brandon, Christopher,  and Joshua —and he constantly shares photos of them on social media because he loves them so much!

Just like brother Donny, Marie Osmond has welcomed a lot of kids too. In 1983, she gave birth to her first child, son Stephen with husband Stephen Craig. The pair got divorced in 1985 and Marie went on to marry Brian Blosil in 1986.

With Brian, Marie had two biological children — Rachael and Matthew. They also adopted five kids — Jessica, Brandon, Brianna, Abigail, and their son Michael, who died in 2010.

After Marie and Brian got divorced in 2007, she remarried her first hubby, Steve, in 2011. They’ve been together ever since!

If anything is certain it’s that Alec Baldwin doesn’t have a boring household. The dad of six once joked to Seth Meyers that he doesn’t make any money from his multi-million dollar movies because all of his earnings goes to his children.

“With all these kids when I make a movie now, I make no money,’ the Departed star laughed. Apparently, he burns all of his money on “hotel bills” for his family and “Twenty dollar orange juice at the Beverly Hotel” for his children. What an expensive appetite!

It’s hard not to love James Van Der Beek and his family! He and wife Kimberly welcomed five kids together — Olivia, Joshua, Annabel, Emilia and Gwendolyn — and they were set to have a sixth one until Kimberly sadly suffered a miscarriage in November 2019.

The Dawson’s Creek alum revealed the devastating news during season 28 of  Dancing With the Stars. “The little soul that we had expected to welcome into our family took a shortcut to whatever lies beyond,” he said. “You never know why these things happen. That’s what I’ve been telling my kids.”

We hope one day the couple will be able to welcome another baby into the world!

Fans have watched these HGTV stars’ kids grow up right in front of their eyes on Fixer Upper! The duo shares five sweet kiddos: Drake, Ella, Duke, Emmie and Crew.