She’s played unforgettable characters in influential films, including WarGames, Bad Boys and High Art, but most fans want to talk to Ally Sheedy about The Breakfast Club. “It still happens actually!” Ally tells Closer about the seminal John Hughes comedy-drama released in 1985. “We had an amazing time working on that film.” Ally’s acting career is still going strong. In Single Drunk Female, a Freeform original sitcom that debuted on Hulu Jan. 20, she plays a smothering mother whose adult daughter moves back home after a stint in rehab. “I really think audiences will love their dynamic,” she says. In addition to her acting work, Ally, 59, is also a college professor in New York City and a book editor.

What drew you to this role in Single Drunk Female?

“I had been thinking I’d like to do a television series — I’ve never [starred in] one. It was just a question of the right thing coming along. I absolutely loved the script for the pilot. For me, this whole show is about the mother-daughter relationship, even though it’s about a lot of other things, too. That relationship is the rock of the entire show.”

Ralph Macchio, Molly Ringwald, and More '80s Stars From Teen Movies — See Where They Are Now!

Your character’s daughter in Single Drunk Female is grappling with alcoholism. That seems timely.

“I’ve been reading a lot of articles which mentioned there’s been a spike in issues with addiction during the pandemic. I think it has something to do with what’s been going on in this country for the past few years and dealing with COVID and isolation. It’s more common than we would want it to be.”

You also sought help in rehab in 1989. Is there anything you know now that you wished you knew then?

“Oh God, it was so long ago! I went to rehab [for] sleeping pills. I started taking them when I was in a really toxic relationship. The person I was with was a real drug addict, and the sleeping pills had something to do with that rocker sort of schedule. I would tell my younger self: ‘Be careful about the men you get involved with because it can lead you down quite a rocky road.’ One of the things that was great about rehab was it also got me away from that person. I needed that.”

Was your family supportive of your early dreams of becoming an actress?

“Yes and no. My mom and my dad both believed in my abilities, but neither one of them wanted me to go to Hollywood because, obviously, it’s a scary place. But I had gotten into USC. So that was my plan — get a BFA in drama and, in the meantime, find myself an agent and start working. And that’s pretty much what I did.”

What do you consider your big break?

“WarGames. I didn’t know it was going to be this huge movie. I just didn’t have that kind of perspective! But it was really exciting to be on the film because it was at the old MGM Studios. It was this enormous production — I would walk around the MGM lot thinking, ‘Oh my gosh, this is where Judy Garland and Mickey Rooney went to school!'”

What was it like to film The Breakfast Club?

“It was a great group. And working with [director] John Hughes was incredible. He was very open to improv and gave a lot of freedom to us. We were on one set for three months. It became like family.” 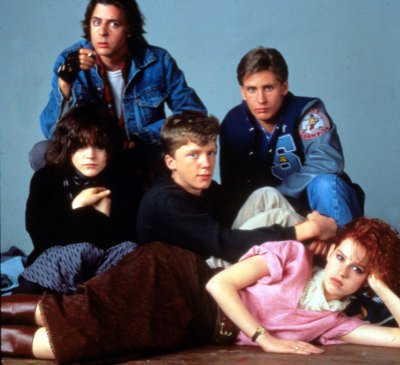 Who have been some of your favorite costars?

“I love Molly Ringwald. I’m still really good friends with her. I also got to play Ellen Burstyn’s daughter in a movie, and I learned so much from her. I really loved John Candy, who I worked with on Only the Lonely, and everybody involved in High Art. I also played a recurring character on the TV series Psych. James Roday, who starred in it, is one of my big favorites. I really adore him.

You’re a mom to an adult son. Did he follow you into show business?

What do you like best about being the age you are now?

“I feel much more settled into myself. I have a kind of satisfaction with the place I am in right now. I love my kid, I think he’s doing really well. I think you get to a particular time in life where there just isn’t all the old drama. Everything isn’t so intense all the time.”

You’re divorced from your son’s dad. Are you open to new love?

“I am completely done with men. I have been for years. I just feel like I’ve been through so many different phases and this feels good to me. Now, if I could just stay in this place where I’m happy with my house and my dog. I have a few close friends, whom I love. This is enough.”

What do you do for fun?

“I’m a loner. I do not like to go out ever, so I have actually not had that difficult a time with the isolation aspects of COVID. I love to be home. I like to be quiet. I like to turn on the news or read a book and just decompress in silence. That’s pretty much my favorite thing to do. And that holds true whether I’m home working or in any hotel room. I just make it a home and take time for myself.”

See Molly Ringwald, Judd Nelson and the Rest of 'The Breakfast Club' Cast Then and Now!

Tell us about your other careers as a college professor and book editor.

“I teach an acting on film class at City University of New York and the City College campus. And under a different name, I do some freelance editorial work. It’s kind of a free-form sort of thing. It’s very satisfying.”

“I don’t think there are a lot of things I want to do that I haven’t done. I am pretty happy where things are right now. I would love if one day I get to be a grandmother. That would be great. I do think about it sometimes, that would be beautiful.”

What’s the biggest lesson you’ve learned about yourself?

“I know that I am not happy unless I have some kind of meaningful work, which is why I have three different types of meaningful work! There’s a feeling of making a contribution that I love. It makes me feel what I did today was meaningful.”

Seinfeld’s John O’Hurley Reflects on Career, ‘DWTS’ and His Next Move